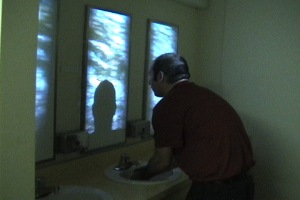 Hudson River Sampler was a two channel video installation
that appeared at the Arts Center of the Capital Region in Troy, NY.
Footage from the Adirondack headwaters of the Hudson River
was projected on the opaqued mirrors of the gallery’s mens’ room,
while similar footage looking seaward from Battery Park was shown
in the ladies’ room. Isolated within the sterile washrooms, viewers
wash their hands in tap water drawn from the river, which runs just
one block west of the gallery. With this mundane act they connect
physically to the vast watershed whose portrait appears, temporarily,
where they expect to see their own.